Each winter, a unique orchestra in Luleå, Sweden, plays a series of concerts on the most delicate instruments in the world. How delicate? If you breathe on them, they’ll melt. In fact, they melt into water each spring.

But come winter, The Ice Music orchestra plays instruments made of ice in an igloo-shaped concert hall in Lapland, the Northernmost part of Sweden. It’s just south of the Arctic Circle.

During shows, heatless LED lights inside all the instruments keep changing colors. The concert hall looks like “a nightclub in heaven,” according to Tim Linhart, who makes all the instruments every year in a six-week frenzy of productivity. They’re so delicate, they get re-tuned between songs, because being played and breathed on can cause slight melting. And if a repair is needed, Linhart says he can just add a little water to patch holes

The sound is very clear and crisp, because unlike wood, ice absorbs no vibrations. You might think this icy orchestra would play only classical, but in fact, they perform rock (using six and 12-string ice guitars), country (with an ice banjo), and jazz.

If you go, take plenty of clothes. Members of the audience are advised to wear multiple layers to stay warm at these cool concerts. 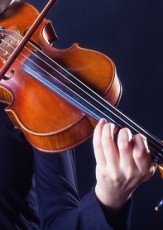 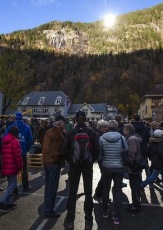 How an Immense Sun Mirror Lights Up Norway’s Tiny Rjukan 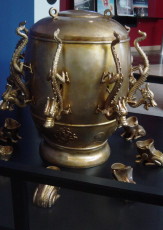